Doori is from Coshocton, Ohio, where he grew up reading books and playing baseball and football near corn fields. He majored in History and played sports at Princeton University. At law school, Doori splits his duties between JLEPP and Notre Dame’s Moot Court team. He spent his 1L summer externing for the Honorable Judge Thomas M. Rose of the U.S. District Court, Southern District of Ohio, and his 2L summer working at a big law firm in Cleveland. After graduation he plans to work as a commercial and appellate litigator and be actively involved in the sports and international community. Some fun facts about Doori are (1) he avidly follows North-South Korean politics, (2) he weighed over 200 pounds beginning in the 7th grade, and (3) he hopes to one day play in the World Series of Poker. 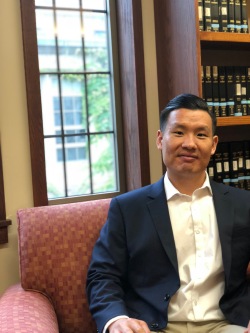